DESPITE two road games, we opened the season 1-1, and (technically, by tie-breaker) atop the NFC East. This Sunday, the Eagles will finally get to play in front the best fans in the nation, and the first sacrifice upon our altar, will be New York’s worst football team. Beating the giants this week further cements our division lead, regardless of how the Foreskins and Cowpies do. So yeah, this week is sort of a big deal in Philly.

The giants aren’t worried about the Eagles. They’re having enough trouble with the vultures circling their 2017 season. The season just started, and already the giants are decomposing so rapidly, that it’s even scaring zombies. I sat through both of their games this year, and I can’t imagine how they’d win this game. I can however, imagine how the Eagles could lose it. We can’t allow that during our home opener.

So let’s talk about the Four Things we need to focus on this week versus the giants :

1) Keep Wentz from wincing: Quick! Guess which QB has been hit the most in the NFL through two weeks. If you said QB Carson Wentz then you were correct. If you’re in denial and need proof here’s a link. (Note: The 9ers and Rams play tonight, so if you read this article after Thursday, one of those teams may own the top spot. It will be somehow worse if they don’t.) Right now, Wentz’s hits and sacks are 9.5 and 4 per week. Those numbers have to come down.

2) Run up the middle: The giants have an explosive pair of edge rushers, but rule of thumb says that we can shutdown their interior rush by running the ball. (Preferably with RB LeGarrette Blount.) If we run the ball up the gut, we’ll tire out their interior, cut their rush off at the knees, and give Wentz a pocket to step up into later in the game. Five to eight such carries in the first half. That’s the soft target depending on how fast we score on drives. (I’d already written most of this article when I found out that Chance Warmack was getting the start at LG, but I’m not changing anything in the article. Just adding this note and doubling down on #2 here.)

3) Avoid blitzing: Our D-Line can shred even good lines. That said, going against the blocking dummies in front of QB Eli Manning, should be cake for us. Better to leave our LB’s in underneath coverage to take away easy completions, and be in a position score if Eli bakes up one of those delicious turnovers that Eagles fans love him for. 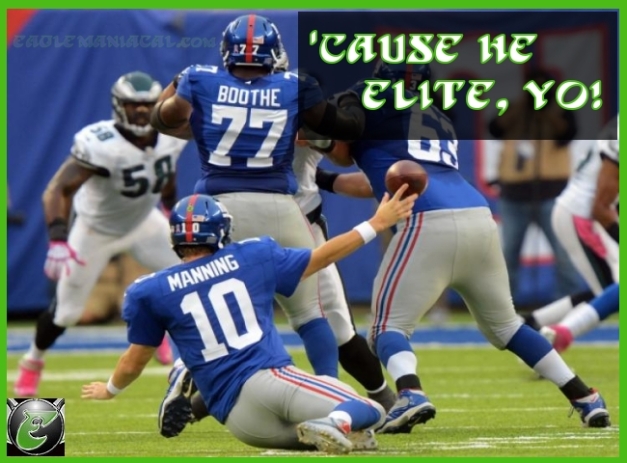 4) Break their spirits early: The giants come into this game averaging 6.5 points per game. That’s a touchdown with no cherry on it. A couple of early sustained scoring drives, where we convert a 4th down or two, putting them where they seem to keep finding themselves every week. It would go a long way towards breaking their spirit, and taking them mentally and emotionally out of the game. While in hostile territory. (This is where the 12th Man really can do some damage.)

(Sniff) (Sniff) You smell that? That smells like DE Derek Barnett’s first sack. DE Vinny Curry is the starter on the right, but I get the feeling that Barnett will see more snaps this week. He’s a first rounder, so you want to sell his jersey to the home crowd. A big splash Sunday would help with that a great deal. Surely the Front Office has made this point to the coach. Enter human turnstile, LT Ereck Flowers, who has stopped fewer people than a Walmart greeter. If Barnett gets a fair number of snaps against him, you know how this ends.

You know how this ends.

You KNOW how this ends.

Troy Aikman will mention Reggie White at least once.

Due to a commitment to running the ball, Wentz will be able to set his feet in the pocket, and more importantly, calm the fuck down. His deep balls will become catches, instead of overthrows. TE Zach Ertz may find it harder to operate against SS Landon Collins, but that will just open things up for WR Alshon Jeffery.

I know we aren’t supposed to look past an opponent, because any given blah blah blah, but seriously, I told everyone what the giants deal was BACK IN APRIL. At this point I’m just constantly nodding, pointing and muttering “Yep. See there?”, as the prophecy unfolds in real-time. Enjoy the game and enjoy your Sunday. Oh, and if you have Philadelphia’s defense in fantasy football, START THEM. (I know I will.)

Note: I will be avoiding game threads (except at the half), because I want to yell and dance around, unfettered. Also I don’t want to drop salsa on my keyboard again.