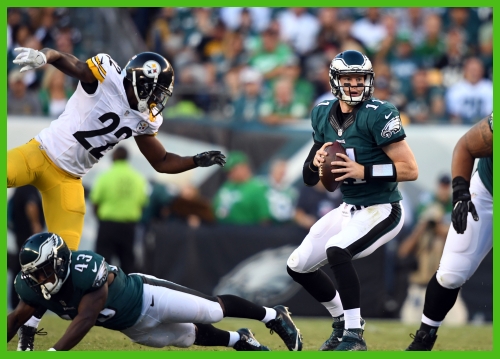 QB Carson Wentz: His first two division games have been losses, as the QB some of the job of rallying his team is on him. If he is indeed a franchise QB. He has the authority to audible into and out of plays if he sees something he doesn’t like or something he likes better. On any given play it’s his decision who he throws the ball to. Coaching be damned, if he truly wishes to throw the ball downfield, it’s within his power to do so. He has just about half a season under his belt, it’s about time we started to see some of the field general he was drafted to be.

WR Odell Beckham: He’s the most dangerous player on the giants roster as far as talent and ability to swing a game’s momentum. However, if we can frustrate him, the hope he could provide to his team, would likely be replaced with despair at yet another of his sideline meltdowns.

Today we sit a 0-2 vs NFC East opponents. While a loss would only drop us to 4–4, suffering 3 division losses out of 6 division games, would give us almost no shot at a later tie-breaker in a wild-card situation provided Dallas continues to hold the division lead. This is what I would consider the Eagles third must-win game of the year. The first was Detroit, a gimme game that should have been a cushion for losses to better teams. The second was Washington. We lost both games. This week is an important measuring stick.

Though it’s a road game, this is a highly winnable game. However, if we blow it, we may as well start playing our youth and begin driving up our Draft position.