WAS MATHIS SMART TO LEAVE? 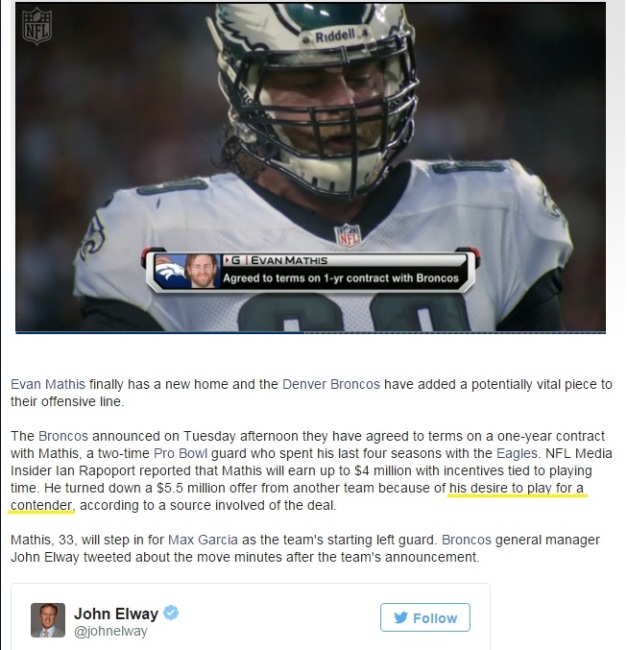 DAMN Evan! Some will want to argue that Evan Mathis shot himself in the foot by demanding his release after the Eagles didn’t give him a raise over the 5.5 million he was set to make for this season.

Many laughed at how long he sat without getting a serious offer, saying he wouldn’t find any takers for even what the Eagles were paying him.

Well it seems that he found a taker for that much, but he turned them down to take less money to play for a team with a shot at winning a championship.

There’s a pretty significant message in there and you’d have to be blind to miss it. If he’s willing to play for 4 million for a shot at winning, why wouldn’t he take our 5.5 million? That is….unless…. Unless he didn’t see this team as having a shot to be a legit contender.

If  the Bronco’s refurbish their interior Offensive Line with Mathis and the Eagles don’t go at least as far in the playoffs, it will mean that Mathis was smart for leaving and finding a contender to play for. And god forbid we miss the playoffs again and the Broncos even go as a Wildcard.

We now HAVE TO make the playoffs. Anything less is embarrassment added to failure.