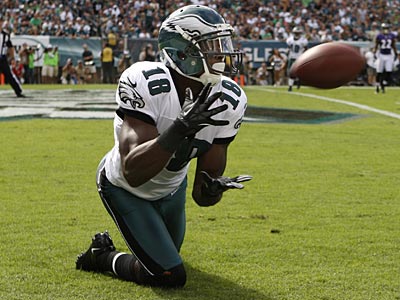 Eagle fans expect a LOT from Jeremy Maclin this year. Specifically, fans expect him to grab 1,000 or more receiving yards in 2014. Damn coming back from a destroyed knee. Damn the fact that in 2010 even with a guy to draw coverage from him, in 16 games Maclin fell 36 yards short of 1,000.

It’s going to be tougher for him now both from the inside and the outside, yet  fans are expecting more than he’s ever been able to deliver. Yikes.

Look…Let me step in on Maclin’s behalf for a second.

It would be nice if Jeremy went over a grand, but instead of expecting so much from him so soon, let’s be prepared to cut our guy a little slack.

His own moments of doubt will be battle enough, he doesn’t need us rattling his cage even  harder. After all we are his fans, right? Our job is to support him. To let him know we have his back. Not to make him think he has to run himself into the ground.

So while 1,000 would be nice, if it becomes clear that he can’t or he won’t; or if it turns out that he needs a week here or there, let’s remember who we are, and what we come to do. Instead of deriding him, let’s show our recovering Bird some love.

We’ll overwork him next year. 🙂